I just completed my first sprint triathlon this past weekend. I played soccer in high school, but I’d never gotten into endurance sports before. I started swimming in college for recreation, took up barefoot jogging two summers ago to teach myself to like it, and after biking to work for over a year, I convinced myself I should try to combine them all and signed up in February.

The Kinetic Sprint (.5 | 18 | 3.1 miles) was at the Lake Anna State Park in Spotsylvania, Virginia, roughly 1.5 hours south of the Washington DC area. I drove down the night before to attend an informational meeting and simply stayed at a hotel. The thunderstorm that pushed through Saturday night had me worried for a horrible race day. However, the overcast quickly broke into sun during the bike and it was gorgeous the rest of the day. I really couldn’t have asked for better weather. 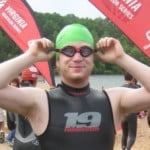 After setting up my bike, getting chipped and numbered, I threw on my rental wetsuit and lime green novice swim cap to splash around a bit before the race started. I was always confident about my swim and the warm up simply reinforced that feeling. However, the race conditions were a very different beast than a swimming pool.

The Swim:
So, I latter learned that the swim is often dubbed “The Washing Machine.” I wasn’t used to running into feet, arms, and frothing water. My stroke was already pretty conducive to sighting, but it was also pretty good for swallowing other people’s wake. Around the middle of the course when I merged with the age group ahead of the novices, I ended up having to tread water a few times to cough up the lovely lake water. The wetsuit was definitely helpful! I didn’t reach a good groove until the last ~250 meters, but was definitely beat by the time I hit the shore.

T1:
I got my wetsuit unzipped as I jogged to the transition area. I threw on a tri top and my vibram fivefingers. It took three tries to buckle my helmet due to fatigue. I grabbed my bike and got started.

The Bike:
So, to give some perspective. I am riding on a ’74 Raleigh Record road bike I picked up when I first moved to DC. It was so old as to be theft-proof at the metro. I threw on both water bottle and pedal cages. I was moderately impressed how well the pedal cages worked with the fivefingers (My toes slotted through comfortably enough). I wasn’t planning on speed so much as simply finishing. I was recovering from the swim and the sun decided to come out. It made for great, scenic route around the lake.

T2:
My second transition was the quickest. I was already wearing my running shoes and could simply drop off the bike and helmet and take off.

The Run:
Unfortunately, I hit my wall as the run began. I was simply spent and began cramping up. So, sad to say I ended up walking the first half of the 3 miles. I finally got some vigor back, got a good jog going, and finished with a sprint in the last .2 miles. I knew going into the race that the run was my weakest point. In retrospect, I should have practiced a lot more cycle-run bricks. It wasn’t that my legs felt off. I simply didn’t know how to handle the energy loss and properly pace myself.

Under 2 hours was my upper goal, I finished with just over 1 minute to spare.

They had a pizza coupon and a water bottle water at the end. The sun was shining and the The Lake Anna State Park was beautiful to just relax around. I cheered on some of the late finishers and eventually packed up to drive home.

I definitely enjoyed checking off the accomplishment. I’ll probably do another one in the future with the lessons learned. I may try it with a real bike as well! The triathlon always seemed more appealing to me than other endurance sports due to the multiple training. I think I would get bored training for only one sport. I can only run or swim for so long before wanting to do something else. 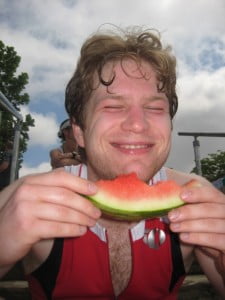